To Change Everything, We Need Everyone

Welcome to Transform's Online Classroom & Learning Community > Activism > To Change Everything, We Need Everyone

A year ago, Holly Roach and I were in New York City at the time of the second anniversary of the Occupy Wall Street movement. This week, Occupy turned three, and this weekend, Holly and I will be in New York City again, this time to participate in the world’s largest march for climate justice, the People’s Climate March. 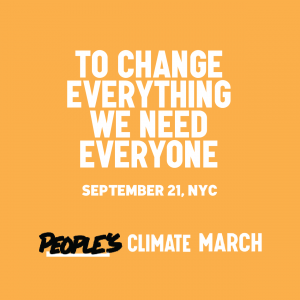 We are going, because we are convinced that people of faith must act proactively and in partnership with other movements for positive social change if we are going to see lasting impact. People of faith and faith communities can play a powerful role in the pursuit of social justice, but too often we’ve been siloed away in our own religious corner of the universe. What if we began to actively seeking to partner with broader movements for social change around the justice issues that are so immediate and pressing right now? For oppressed people and for the planet?

I believe this would start with asking a different (more missional) question: What is God doing in the world? And how can we join God in it? Often the solutions already exist and good people — often spiritual activists or people of no faith at all — are already doing the work. We just need to find them (outside the walls of our churches) and partner with them in the renewal of all things.

The People’s Climate March has employed a very simple slogan to capture the imagination of what this means: “To change everything, we need everyone.” The idea of seeing a progressive Christian movement rise up in the U.S. that can partner with broader movements for social transformation is one that very much excites and inspires me. It’s the vision that is driving our work with TransFORM Network right now and what I hope to be a part of fostering in the coming months and years.

I’m already part of a growing, fusion movement here in North Carolina called the Forward Together Moral Movement. If you haven’t heard about it yet, I hope you’ll discover it, and it’s leading voice Rev. Dr. William J. Barber II, who has been instrumental in bringing together a broad-based coalition of groups, united by the simple idea that what affects one of us affects all of us. Or as Dr. King once put it, “Injustice anywhere is a threat to justice everywhere.” We are all connected. The struggle for justice is common to us all. We are all in need of mutual liberation. Can we be united not just within our niche religious corner of the world but with others who are engaged in a common struggle for justice? I know we can be. I hope we will be.

It’s not too late to join the People’s Climate March this Sunday, September 21 — either in the streets of New York City or at a coordinated action in your area. Watch this one-hour documentary online to learn more about climate change and the urgency of this moment we are living in right now:

Media, technology, and the future of faith